How can I find you again, holy names,
And you, letters, dark as ruined temples?
O, how my blood cleaves to you, helpless; (...)
Let me stay with you, (...)
The square-root letters of Your testament,
Knowing that the unquenchable light is spreadingAnd pouring the warmth of millennia into the dusk. 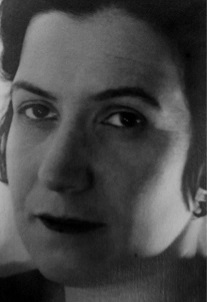 Raissa Bloch (married Gorlin), was a St. Petersburg (then Leningrad) born scholar of Medieval literature, poet, and a scientific translator. She studied in St. Petersburg and Berlin where she earned her doctorate in 1924. In Berlin, she was a frequent member of Russian-intellectual circles where she met her future husband, Michel Gorlin. After Hitler and the National Socialists rose to power, they couple fled to Paris where Bloch continued her research as well as her work as a scientific translator. Her linguistic competences situated her in the triangle of German, French and Russian intellectuals. In 1936 her only child, Dora was born, around the same time she lost her German citizenship. After the occupation of France by German troops, her life was in great danger. In 1941, her husband was deported first to Pithiviers and later to Auschwitz. Raissa Bloch became member of a secret aid organization for children, OSE (OEuvre de secours aux enfants) and helped numerous children to pass the Franco-Swiss border. Her own attempt to flee to Switzerland in 1943 failed. Due to a mix-up with her name she was arrested at the border and sent back to France. Raissa Bloch was deported to Auschwitz where she was murdered in 1943.

We are planning our first international conference with the topic Adaption - Autonomy - Continuity: Academia in Times of Crises (20th century) and are inviting scholars to send their proposals.
For the full CfP please click here